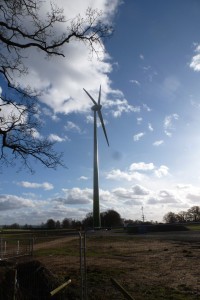 The Bat Group has been carrying out surveys at Sandy Warren, the RSPB headquarters for many years.
When this wind turbine was first mooted, we were involved in discussions with the RSPB at the planning stage. For the last wo years we have ben surveying the area adjoining the turbine.  The RSPB also worked with the Bat Co0nservation Trust at the planing stage. We shall continue to monitor this area to see if there is any noticeable impact on bats at the site.

Bob was invited to the launch meeting on Monday, and the Bat Group got an honourable mention. (Well actually the Bedfordshire Bat Group Trust, but hey ho). Bob got talking to the Chief Ecologist at Ecotricity whose turbine it is. The siting of the turbine is such that it should provide half the electricity used by all the RSPB will be met by the turbines. The turbine is set to turn off around dusk. In addition, they are placing a state of art detector on the micelle, which sends data electronically. It is hoped that if bat activity is high the turbine will be turned off. Ecotricity are doing post  installation monitoring . The chief ecologist is interested in our results and we will be sending both the 2015 and 2015     , once Tony has finished analysing this year’s data (a mammoth task)

This entry was posted in Uncategorized and tagged Sandy Warren, wind turbine. Bookmark the permalink.