Fun with the Jersey Bat Group

Bob was invited back to do another training session and Jude., Since we went last year , bats have begun to use the bat boxes and Miranda and Ani have got their Bat licences. Over the winter Miranda made one of Bob’s inexpensive double high set ups and we were able to use it when we went on the two evening trapping.

They have also acquired a harp trap and lure which also got used to good effect. On the first night they caught a number of common pipistrelles, which gave some of the new members their first opportunity to see bats in the hand, and where inoculated gave them a chance to handle, and also to hone their processing and recording skills. 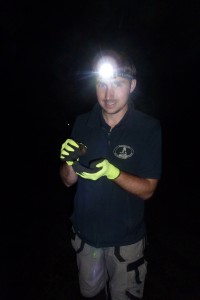 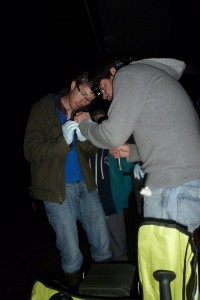 On the second day Bob ran an indoor course on how to avoid jumping to conclusions when identifying bats and the importance of checking all the features. (he provided them with a table which gave the main features as a table rather than as a dichotomous key). He then went on to explain how using a heterodyne detector allows you  a chance to ID bats if you tune up and down and also listen to the rhythm of the calls. He finished off by playing some ultrasound calls on the lure and everyone had a go at identifying a number of calls, and ‘because the Jersey group is as silly as us, a number  “danced about” to  rhythm) 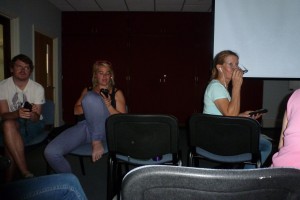 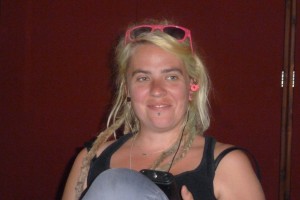 On the second evening we headed out again and people practised their ID skills. This time we caught a load of bats

Bob and Jude got very excited as in the course of the evening they caught more Nathusius  then we did all last year. 6 bats in all,. We caught five and to make matters worse, two of them were females and one was pregnant. ( we have never caught a female, let alone a pregnant one)

It was really exciting so see how much progress the group has made in the past year and we hope to be able to play host to some Jersey Bat Group folk in the future. OK so we don’t have many Nathusius, but we do have some other bats they haven’t found (yet).

This entry was posted in Uncategorized and tagged Jersey Bat Group, Nathusius pipistrelle. Bookmark the permalink.