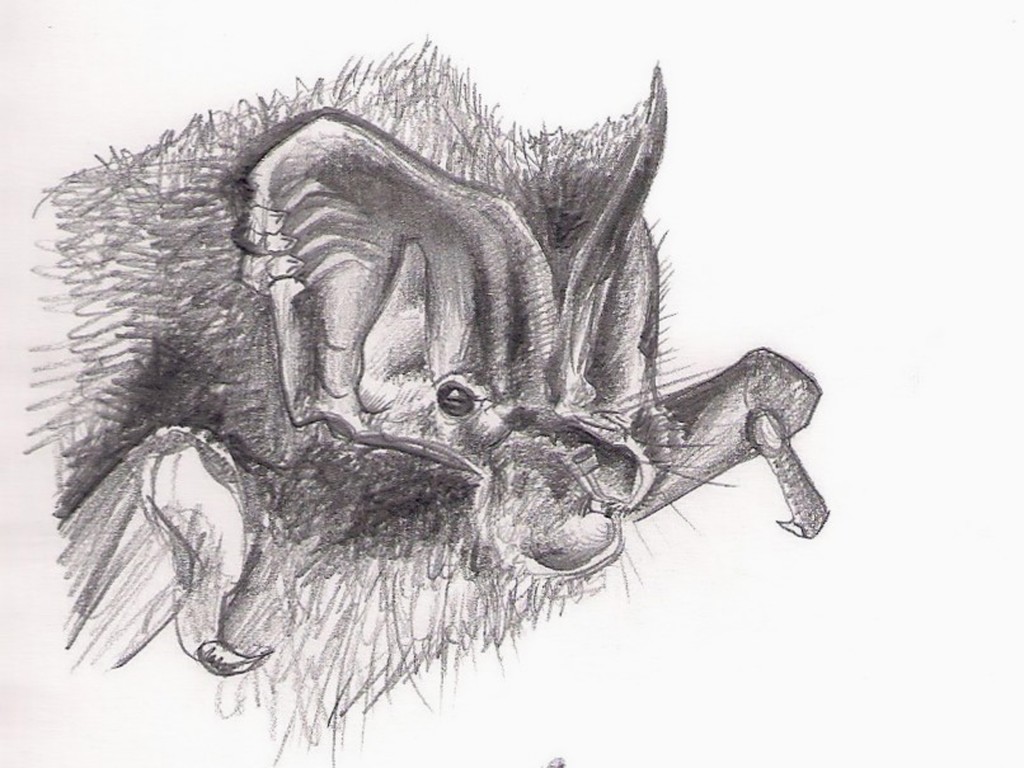 Drawing of a barbastelle by James Hanlon, Beds Bat Group

It’s a while since we did any radio tracking so when Chantal, who belongs to both the Beds and Herts and Middlesex Bat Groups asked if we would like to help with a project in Herts we were keen to help.

She and Ian had prepared the way thoroughly. Returning to a site which they knew had barbastelles ( from a survey we helped with last year) they left out a number of detectors to try and monitor barbastelle activity in the last couple of days.

With this information in hand we got together on Fri night and set up 2 mist nets and two harp traps and lures to see if we could catch and radiotag a female barbastelle. ( They are most usefuol ass they return to roosts, whereas males often have single occcupancy of a tree roost.

While Bob and Matt set the traps. Two other groups walked transects in the hope of hearing the bats, making recordings on our trusty Peersonics as they walked. We started at about 9.1o and by 9.30, therfe was anexcited squeak over the radio. Three barbs had flown into a net. There was a flurry of activity as Chris rushed to Chantal’s rescue with bat bags. I stayed at base camp. Chris was keen to hear bar calls so of course just as he left there were a number of barbastelles flying around base camp.

The suspense was killing. Would we get a female of the right weight? ( Radiotags can only be 5% of the bat’s body weight). Chris re-emerged  with three bags. He was eclipsed by Matt who returned with four from the second net! Seven Barbastelles in less than 5 minutes.

The bats were processed and as soon as we had two suitable bats we closed the nets  and processed the remaining bats. All were females 5 were post lactating and two were beautiful chunky juveniles, in beautiful condition. The adult females we also a really good weight. Once this was done, Matt tagged all of the bats. We picked the two heaviest females and Matt proceeded to ring them them.

The last time we did any tagging we used colostomy glue but this is no longer available.We were told a very experienced bat  worker (thanks Dani) that eyelash glue was a good substitute. Once Matt the ready a tag was prepared and delicately attached to the middle of the shoulder (where in theory she could not groom off the tag

Chris was doubtful the glue would work as his daughter used the stuff ( or so he claimed) and the eyelashes always came off.

After checking that the glue had set, the bats were released one at a time. Half of the party took to cars to try to track the bats, while others remained behind to take down the traps and the furled nets.

A really exciting albeit frantic first night, SO frantic that there was barely time to eat any of the cake I took. We left it thee for the trackers.

A group went out at dawn to try to find roosts and found two not far from base camp. Tonight we will try to get an emergence count. ( Bob is taking his video camera and infra red light. Another night’s adventure follows Bob is also taking a copy of Danny’s programme to help with processing all the data collected by the array of detecorss used yesterday.

PS We also caught a couple of common pipistrelles , a beautiful brown long eared and two Natterer’s which we cooed over before being quickly released.

NB this kind of work needs a licence which both Matt and Bob have.

This entry was posted in Uncategorized and tagged barbastelles, radiotagging. Bookmark the permalink.