Another bat in care 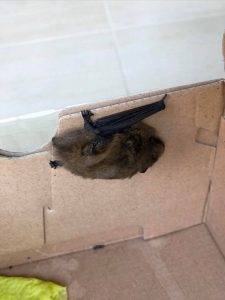 Gill posted this on  the Bedfordshire Bat Group Facebook Page.

Last night  (Dec 30th) Milo the cat popped out and returned with a bat in his mouth. A little pipistrelle. I dashed out and grabbed the cat by the scruff put my hand in front. He obligingly dropped the little creature into my hand (ungloved but I had to act fast). The bat seemed dead so I put him in kitchen towel in a box and called Bob, font of all bat knowledge.

He said to put him in a box with an upturned cap of water with a kitchen towel so that the bat wouldn’t end up upturning the water and having none. This I did and went to bed.

3:30am I awoke worried about the bat. I went upstairs to check him and discovered he had vanished! There was a hole in the box to enable you to put your finger in to raise the lid that I had not noticed.

Oh no, where in the study would the little fellow have gone! After running around in circles for a bit worrying about how I would tell Bob that I’d lost the bat, I calmed down and looked at the box on the desk and tried to imagine where the bat would have gone. I got down on hands and knees and looked under the little set of drawers and there he was. With gloves on this time, I gently picked him up and put him back in the shoe box after first covering up the hole. He wasn’t impressed and squeaked and chattered at me but he had to go back in the box until a bat carer could come collect him. I was really nervous about him squeezing out so I put a MacBook on top of the box to keep it pressed down.

Went back to sleep, to dream of bats and searching for them in all the nooks and crannies of our study. This morning the first thing I did was nervously check him and he was still there, up near the top corner of the box. All seemed well. I called Bob again who reassured me that bats can go for some time without eating. No live meal worms for me!

Tyrone came soon after and we transferred the little pip into a ventilated cliplock box. He checked him over carefully, and there wasn’t a mark on him. His wings were undamaged and there were no signs of trauma anywhere on his fur. He must have played dead really quickly when my cat got him so Milo just gently carried him home to me. This was one Xmas gift I was very grateful for. All’s well that ends well.