Another talk last night, this time to another Luton Trefoil group. Two of those present had been at the talk we did at Slaughter’s Wood last year, and I was doing more or less the same talk, but they didn’t seem to mind. They had allowed some of their husbands to come along and when we arrived they were waiting in a corridor while the ladies had their meeting.  Once the talk started, there was a lot of banter going on, particularly when I mentioned the males did not stay with the females, by I think the men gave as good as they got 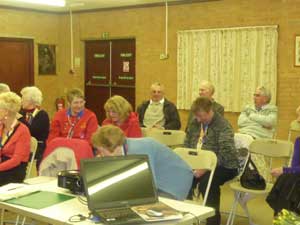 This entry was posted in Uncategorized and tagged Luton, talk, Trefoil group. Bookmark the permalink.