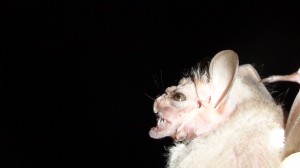 Friday saw four of us going to a meeting of Luton Sight Concern’s Friday club.  They had asked us to do a talk. This was the first talk I had ever done for a visually impaired group and I spent ages hunting out recordings of bat calls . It is quite a challenge to describe what a bat looks like to people who can’t see it. I showed a picture of Centurio senex which was a real challenge to describe.

(and yes ,I know bats aren’t blind but I like this logo)

One member wanted to know where he could get recordings of bat calls from. I was able to give him a copy of David King’s Enchanting Echoes CD which Dan Merrett  Project leader for Count Bat sent me. (This is on the Bats for All download) and pointed  him- in the direction of the Warwickshire Bat series on sound files  http://www.warksbats.co.uk/– must get round to putting some calls on this site

. After the talk we used a number of aids to help people get an idea of what bats felt like. We had borrowed thermoforms from the Bat Conservation Trust and used our own models made out of foam and weighted to be the same weight as a bat in real life 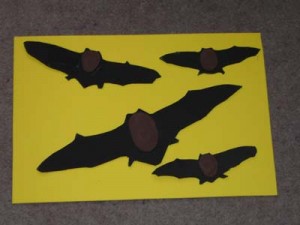 We also took  a truly hideous rubber bat which was brought as a joke present. I think it was sold for Halloween.  Dave took it over to show one lady who was partially sighted and scared her half to death, for which we rapidly apologised.

This entry was posted in Uncategorized and tagged bat calls on the web, Bat Conservation Trust, bat resources for the visually imparied, Luton Sight Concern, talk. Bookmark the permalink.