The bat group are hardy souls and braved to poor weather to do two of our regular surveys last night. 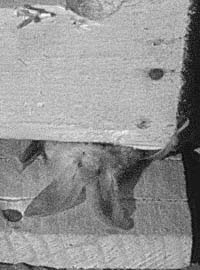 “It was a pleasant evening, the rain held off until we were heading home. 4 of the boxes had residents at home, 3 boxes confirmed as Brown long eared with 2, 4, and 13 bats emerging but some of them were a little lazy and stayed inside, the fourth box was unidentified but probable Brown long eared The Noctules and Pips were also out feeding over the lake and giving a great display around the boathouse. 12 Daubentons were counted through the torch beam.”

While this was going on two of the group strolled down to Rushmere to do a reccy.

Meanwhile in Sandy Warren other hardy souls were braving the elements. There were lots of bats about – until the sky’s opened , when they sensibly retreated

Sunday should be a real endurance test – long hours in a very wet and muddy woodland checking bat boxes. Will the bats have moved back in?