Kelly who co-ordinates this survey writes

“had a productive survey at Harrold Odell county park last night. Dived bombed by soprano  pips most of the evening. Great views off 3 Daubentons at the bus shelter including one that swooped  on an insect Aidan had the torch beam on! and watched a ‘big bat’ by the car park doing circuits… need to confirm species on recording but was a 27-28kHz!” 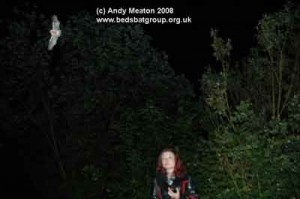 Harrold Odell is a fantastic site and one of the few places in the county where we pick up serotines which echolocate at 27-8 KHz. It is also swarming with bats. It is our busiest site These surveys are open to members of the public and the next one is on June 14th