Geraldine, one of the Wardown Park survey co-ordinators writes

“We had a good evening, checking the boxes and walking around Wardown Park. For the boxes that we could see into, there was nothing inside them except insects or spiders/webs.

Our first bat sighting was a Common Pipistrelle, near the tennis courts.

When it came to walking round the lake, we had to make a slight change to our usual route, as the northern bridge (which is a suspension one) has been closed due to structural defects. There were more Common Pipistrelles around the lake, but unusually very few at the southern bridge.

On our walk back up the lake towards the museum, as we reached the boarded up northern bridge, we all spotted bats flying, but weren’t picking up any echolocation calls on our detectors. It was fairly dark there an hour after sunset, and the boarding up of the bridge created more shade. We think that they were most likely to be brown long-eared
bats.”

We know there is a brown long eared roost in the museum roof, but this is the first time we have spotted brown long ears flying. They are notoriously difficult to find because they have a very quiet echolocation call and often lurk amongst vegetation picking insects of leaves so we don’t see them often. 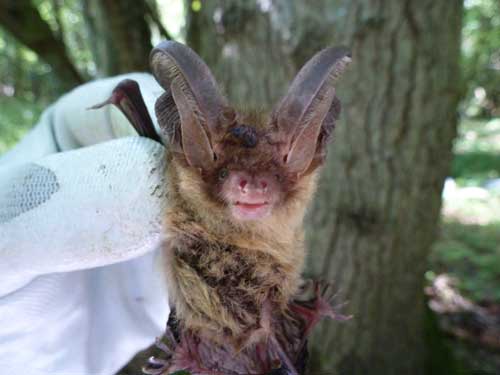 This entry was posted in Uncategorized and tagged pipistrelles, survey, Wardown Park. Bookmark the permalink.