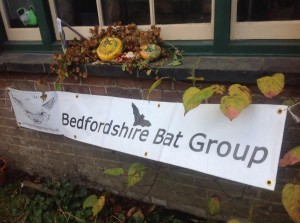 Photo Lin Beckett. Thanks for giving us permission to use it Lin

We really feared the worst when we saw the weather forecast but we were lucky that the rain didn’t arrive.

We shared a small room with friends the Greensand Trust, There wasn’t really room to swing a bat let alone a cat, but we managed the best we could.We stood in a corner and caught people’s attention whilst they were waiting to make a flappy bat. I had meant to get a photo but it was always too busy

Thanks to everyone who showed interest and to those who bought something or gave ius a donation. That’s it for the season now, so we can pack away this stuff along with the surveying equipment- if we can just find room for it.

This was our first event without the captive Nocule and we really felt her absence – as did several folk who came specifically to see her. One lad was cross we didn’t have a bat to shaow and we had to explian you can’t just go out into the wild and catch one, and that the only bats we were allowed to have was an injured bat and we had no bats in care to bring.

We weren’t as rushed so were able to have longer chats with people and the highsopot was finding someone who had a maternity roost we didn’t know about. We swiftly got her details and Viv who lives nearby has offered to go round and identify what the species is next season. The roost owner was excited to have bats and has been counting them out all year.

If you ar ereading this and have a roost, do let your local bat group know about it. Such records are very useful to have and the worst that will happen is that they will suggest you take part in the Bat Conservation Trust’s National Monitoring Programme. They’d probably offer to do it for you if you are stretched for time- but it is great fun to do.. http://www.bats.org.uk/pages/colony_count.html

This entry was posted in Uncategorized and tagged Luton Hoo Apple and Pumpkin Day. Bookmark the permalink.