First visit to Stockgrove this season 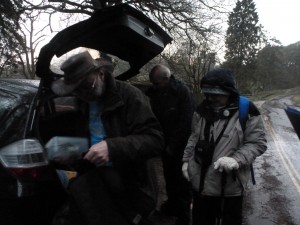 After the success of the first Lakeside Survey we had high hopes for the first Stockgrove survey. But the weather had other ideas and the rain fell enthusiastically.To begin with there were more of us than there were bats as a forlorn crocodile trudged off protecting their detectors from the rain. We were joined by Yan and were fearful that she would see and hear nothing.

Angie, the co-ordinator of the survey said

The first bat of the evening was at 8.06pm, a Soprano Pip in Bakers Wood. Also at 8.06pm at Box 11 a Pipistrelle ventured out – this was most likely a Common Pip but this was unable to be confirmed as the sneaky bat kept quiet on its exit.

This was followed at 8.11pm by the sounds of a Noctule somewhere near the lake.

At 8.12pm, despite it being drizzly ,a couple of Soprano Pips flew around a tree by the side of the lake, a very welcome sight which lifted the spirits of those lucky enough to see them.

The Daubenton’s count over the lake gave 12 passes through the torchlight.

So it wasn’t a wasted evening, but hopefully it will be drier next time and more bats will venture out, when Yan comes out again.

This entry was posted in Uncategorized and tagged Stockgrove Country park. Bookmark the permalink.