Back again and the nettles have grown quite a bit in the last fortnight. As per usual we surrounded the roost and recorded 780 bats coming out, which is a lot for this time of year I recorded the ones coming out of the exit I was watching just in case a Nathusius was sneaking in there, but all the bats I heard were sopranos. 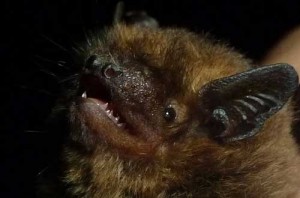 Whilst doing the count I didn’t really take in the big bats flying about, but there on the sonogram were loads of Noctules and serotines as well as a few common pips flying past.  There seem to be more big bats around this year.

Nicky, who seems to attract rarities paid her first visit here, but we heard nothing else. What was I expecting – an Alcothoe?

Nice to have Mark back in the gang