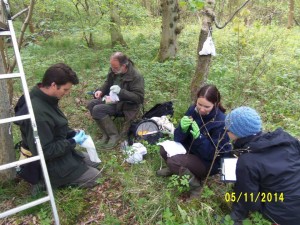 When Bob set off for the  Kings Wood box check, he didn’t expect to fins any bats as this time last year there were none. However, just in case he took his bat rings with him.

Just as well as five of the boxes checked had Brown long eareds in, including two in which we had never had bat signs before.

Each bat was ringed and their details recorded before being put back in the box they came from. (The box is plugged and left for half an hour and this seems to stop them flying off.) Gwen won the prize for the most striking handling gloves( see below) 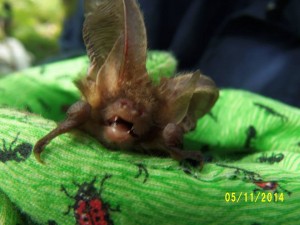 It was a very weary Bob who came back last night – and they had done less than half the boxes.

Big thanks to Alex, Gwen ,Nicky Mark and Steve (from the N Bucks group) who helped and to Mark who has volunteered to go back with Bob on Friday to try to get more of the boxes looked at

For the technically minded they found bats in five boxes

Most of the females were in breeding condition

The females were ringed on the left wing and the males on the right.It will be interesting to see how many we see again later in the season