Earlier last month I waxed lyrical about the delights of this site, and we took ourselves back there last night. While the rest of the party strolled round the lake, I surveyed a more localised area a little down the path from where I had been the previous evening.

Once more the bat activity was very high. I made a fifty minute recording and there was only one minute of silence. Most of the bats were a mixture of soprano and comon pipistrelles which cavorted about in the tree canopy. 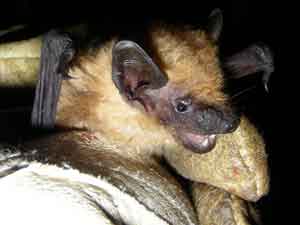 Once again I heard a Noctule over the lake, but the real treat awaited until I returned to the seat by the water to dig out my head torch.I described last time how we heard some serotines, which delighted us. These are rarely heard by us and we usually have to make do with at most half a dozen passes. Tonight there was a real treat in store and thoughts of walking transects soon fell away as the local serotines put on a fantastic display.I recorded about twenty minutes of more or less constant activity.

Serotines have a syncopated rhythm rather like a drunk jazz drummer. They have a very loose limbed relaxed slow flight and I got good views of them at times.

The others walking round the lake only heard a few serotines and when they completed the circuit of the lake we all foregathered at the seat to watch their antics. Bob and Gwen set out to do another circuit and eventually returned with grins on their faces. No,. we had not found a Nathusius but they heard something else – a Myotis which wasn’t a  Daubenton’s as far as they could tell. It didn’t hang around for long but was at a place which would be just perfect for a mist net – out of the way of both walkers and fishermen.

Another survey is on the cards.

This entry was posted in Uncategorized and tagged serotine. Bookmark the permalink.