A very successful night at Stockgrove

When I saw Geraldine and Dick bouncing abut like a pair of  gleeful Tigger’s I know they had seen something good. The following explains it all

“5 bat group members including 1 who has recently joined, had a wonderful
time last night.

At first we thought we were not going to find any bats in the tree
roosts, Bob had brought a hand net with him in the hope of needing to use it. As we approached the low roost we heard several passes by Soprano Pipistrelle(s). Bob reached the low roost first, where he immediately spotted fresh droppings and a bat in the hole who was looking down at him. Success, the roost had Noctules using it again. As it was the low roost, the poles for the hand net weren’t required. Bob and newbie Becky stayed there to catch and count the bats out. Bob caught 2 Noctules, both female. One of them had a cunning plan, she
managed to get out of the bag, the other Noctule who had initially seemed stroppy was more co-operative. There were at least 9 bats in the roost.

Dick and myself went on to check the bat boxes. On the way to the Pine Plantation, near the old boathouse we saw and heard 2 Noctules giving a fantastic flying display over the lake. When we reached Box 4, we found  inhabitants, a group of Brown Long Eared Bats having a quiet conversation about whether they should go or should they stay. We  worked out the best vantage point to see the bats emerge, and had chosen  the right spot we had a small portion of sky visible behind the box.
Wow, we had 8 emerge, with a number of them coming up to have a look at us, there’s not much better in life than having a Brown Long Eared Bat up close and personal. In our four and a half years of attending the Stockgrove Survey this was our best ever for seeing Brown Long Eareds. 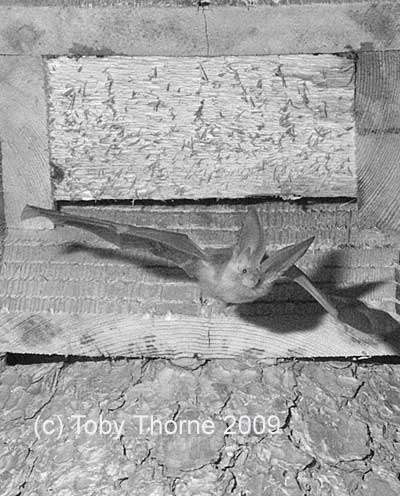 The Brown Long Eareds very considerately all emerged leaving us plenty of time to get to the spot where we do the Daubenton count through the torch beam.

The fly through the beam was very impressive, with one of the Daubentons showing off their skill at trawling for insects. The total amount of passes was 176, there were at least 3 Daubentons taking part in this event. After all this excitement we had to sit down on the nearby bench to recover before we walked back to where we’d parked our cars. Not far
from the Visitor Centre, Bob picked up Serotine calls, so we were able to add those to the list of bats seen and heard. Not bad going for one
night.

Thanks to first timer Becky, Jude, and Bob, for accompanying us. We missed having Angie with us, and will be very glad when she’s fully recovered and able to lead this survey again.

Gwen that’ll teach you try to buy a house!

2 Responses to A very successful night at Stockgrove