A visit to the common pip roost 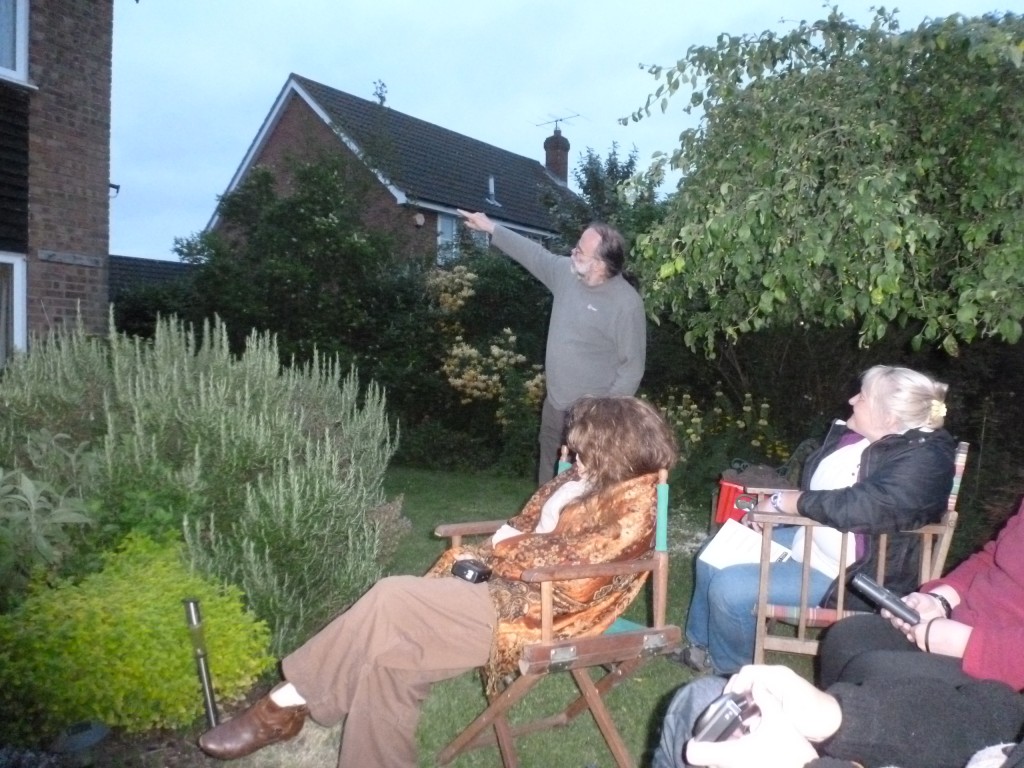 Once a year some of the group head off to the common pipistrelle roost which has been observed closely since 1988. A earlier date to meet the bats was thwarted but the bats did co-operate by arriving for the date we had set. Tony had set up the bat group’s infra red camera so Ann and John had been able to watch the bats emerging from indoors on colder evenings and last week we had an excited e mail saying the bats were at last back. We assembled as usual and took our lpace in the comfy chairs on the lawn.

While we waited for the bats to emerge John showed folk round his garden which is crammed with bat friendly plants, which both attract insects and look gorgeous. ( have a look at http://www.bats.org.uk/pages/encouraging_bats.html for some suggestions)

We could hear them making a lot of noise in the roost, apparently bickering as to who was going to be first out. Then a small brown face appeared and peered out into the garden  like an actor peering through a safety curtain before a performance .

One, two , three and count was on. Fourteen fifteen….. nineteen twenty… thirty, thirty one.  Just how many cakes were this lot going to demolish? Older bats explained to younger ones that this was typical behaviour by the Bedfordshire Bat ( and Cake Eating) Group 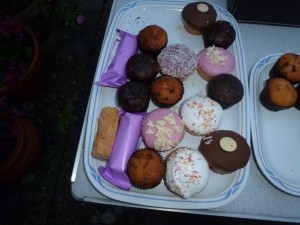 Just a few of the cakes the Bat Group devoured. Photo Jude Hirstwood

The bats unable to believe the display of gluttony which was taking place, left their roost and circled over us, cutting circles and arcs  into the air like Olympic figure skaters do on ice. They flew ever closer to observe the feeding frenzy as we watched in awe at their acrobatic skills.

By the end of the evening  98 bats had emerged, (the bats did not reveal the cake count)..Becky fresh from counting 800 last week volunteered to count them out.

This is the largest number of bats we have had for some years and we think that this year it has become a maternity roost. Usually the bats leave before giving birth, but this year may be different. We had further evidence of this when 5 of the bats returned to the roost after a short period – a sign that usually means there are young inside.

As there were still bats coming out,  the bats had to wait to return through the exit hole and swooped and dived towards the roost exit before veering away at the last minute as another bat was  set for take off.

Finally we left them in peace and headed home ( some of the group bearing off cakes in case they needed a snack on the way home).

This entry was posted in Uncategorized and tagged common pipistrelle, roost. Bookmark the permalink.