Thia magnificent photo of a Daubenton in flight from http://www.leeds.ac.uk/news/article/3358/bats_split_on_family_living

We had a very good turn out for this survey (13 in all), with a number of people who  were nn members who were paying their first visit to Stockgrove.* The additional allure of
Bob harp trapping may have had something to do with this.

Viv and Malcolm led one group around the tree roosts, while Dick and
myself toured round the bat boxes with the other group, leaving Bob and Mark to set up the harp trap.
As expected the first bat to be heard was a Soprano Pipistrelle. This was by boxes 1 – 3 at 20.58, the only occupant of a bat box was a Blue Tit. Some of the other boxes had spider webs around the entrances. A Soprano Pipistrelle was the first to be picked up by the tree roost group at 21.11 when they were close to Tree 7. Sadly all the tree roosts were empty on this occasion. The first Noctule to be heard was at 21.22 near the low roost with a Serotine also being heard in the same area at 21.21.
Daubentons were heard and seen from 21,22 .over the lake., which was really early for them  The Daubentons  later went on to give what may be an all time record number of passes through the torch beam. 244 clicks on the tally counter over a five minute period, at times there were 3 or 4 bats flying through the beam at the same time, which contributed to this rapidly growing total. As well as the Daubenton’s flying through the beam we also had Noctules and Pipistrelles flying overhead. We don’t have a record of Common Pipistrelles being heard, which is unusual for Stockgrove. 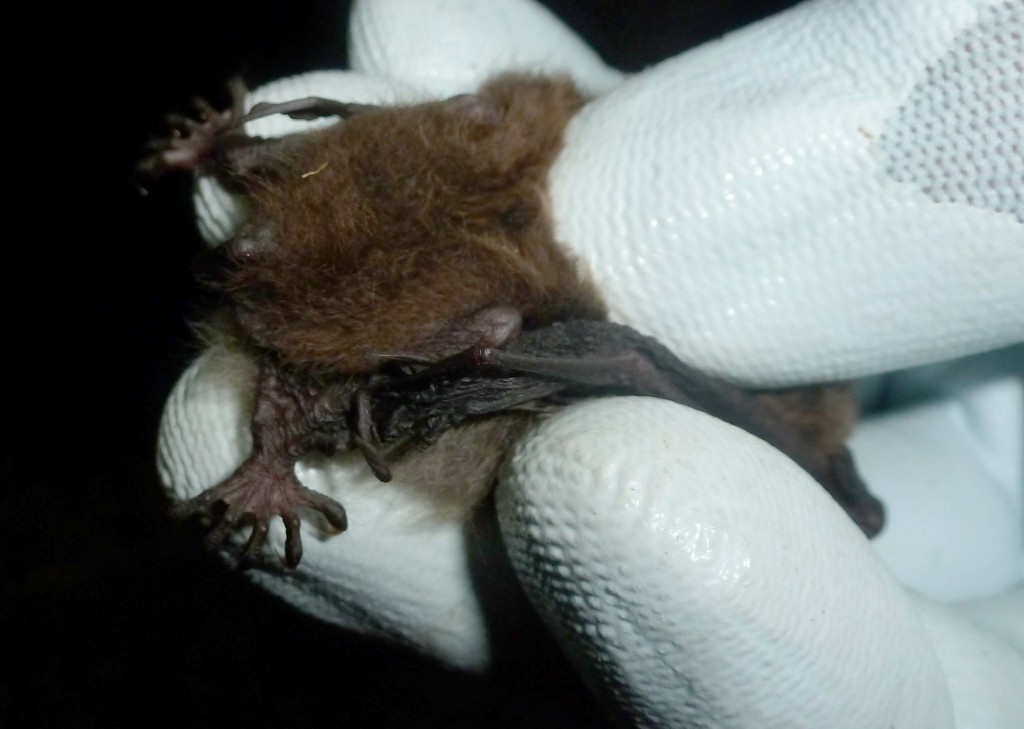 Photo of a Daubenton’s foot by Hedj Dollman ( taken at Harrold Odell.) Notice the big feet for snatching insects of the surface of the water

Bob and Mark had set the harp trap up not far from where we do the Daubenton count, so the whole group got the chance to see bats in the hand.. They caught a  total of  4 juvenile female Sopranos, 2 juvenile males Sopranos and 3 juvenile female Daubentons.

The people who’d left early had seen 1 juvenile female S P, and the 3 juvenile female Daubentons. Glad to hear that those who remained were rewarded by seeing the additional bats.

Many thanks to Alex, Bob, Claire, Ian, Mairee, Malcolm, Mark, Paul,
Phil, Simon, and Viv for their assistance with the evening.

*if you are a non member and want to join us at Stockgrove, e mail us by Sunday night and we will make sure we don’t start without you