Review of an important reference source for bat workers 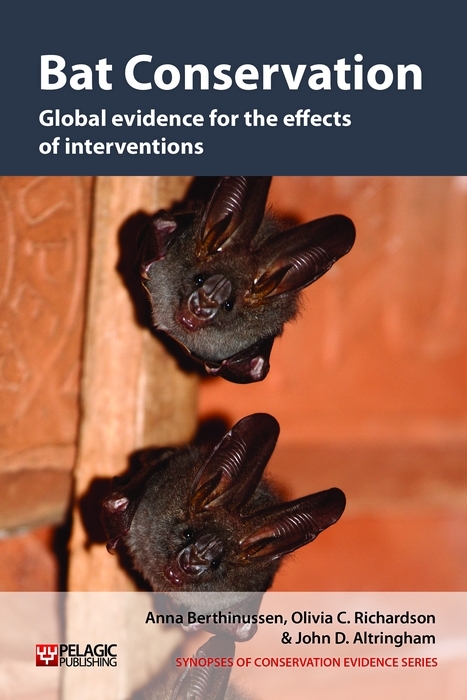 We have been sent a copy of this book to review by the publishers.

It’s an impressive book. See below for the full review

Bat Conservation: global evidence for the effects of interventions by Anna Berthinussen, Olivia C. Richardson and John D. Altringham. Synopses of Conservation Evidence series, Pelagic Publishing, 2014, 104pp.
£19.99 pbk, £49.99 hbk, £9.99 ePub/Mobi/pdf ISBN 978-1-907807-90-9 (hbk)
Good conservation should be science-based; measures we take to help conservation of a species or to mitigate for environmental changes should be supported by evidence to show that they can bring about the effect we want. All too often a lack of evidence or a lack of knowledge about evidence that exists means that the measures we take are at best a guess based on what seems likely to work, and at worst on following what others have done without any thought about the outcome. The Conservation Evidence project www.conservationevidence.com was set up to provide an online resource which summarises evidence for the effects of conservation management interventions so that “a land manager, a conservationist in the public or private sector, a farmer, a campaigner, an advisor or consultant, a policymaker, a researcher or someone taking action to protect your own local wildlife” can assess the evidence and make more appropriate decisions about conservation measures.

This book is the fifth in a series presenting a summary of this evidence relating to a particular habitat or group of species; in this case, to bats.
The clear and structured approach to identifying and categorising conservation interventions makes locating evidence on a particular on a particular issue straightforward. The coverage is global and considers all bat species. In a British context some issues such as logging and hunting are not of direct relevance, but the majority of the content is. Some sections, notably those on wind turbines and artificial roost structures, should be required reading for almost everyone with involvement in bats, from planners and developers to bat group members and voluntary bat wardens. The book begins with a clear and direct explanation of the approach taken, with particular emphasis on how the often used “we found no evidence” should be interpreted.

A lack of suitable published evidence does not provide evidence of no conservation effect, and possible reasons for such a lack (lack of research, results not published, publications not satisfying the requirement for direct and quantified testing) are indicated. In the chapters that follow, each dealing with a type of threat (such as residential and commercial development, transportation and service corridors or human disturbance – caving and tourism), the phrase “we found no evidence” becomes distressingly familiar. One of the most important aspects of the book is to highlight how little evidence there is at present – a constant reminder of the inadequacy of the received wisdom on many issues.

The book is not easy or comfortable reading. It is intended to be referred to rather than read from cover to cover. Having said that, I found it rewarding to read substantial sections in a sitting in order to get an understanding of the (usually very limited) extent to which prevailing views on many issues are supported by direct evidence. John Altringham has often been outspoken on this point, and the authors have not flinched from addressing essential issues even when, again and again, “we found no evidence” is all that can be said. When evidence is available, for example on providing artificial roost structures, it is clearly and effectively summarised and the limitations of the evidence are clearly indicated.
Ideally, this book should quickly become outdated as new research is carried out and new evidence accumulated.

This is unlikely to happen quickly, and the electronic formats should enable the book to be updated regularly. As it stands, the book is likely to remain valuable for many years, and it should be read and constantly referred to by every bat conservationist, bat enthusiast, ecological consultant and local authority ecologist.

This entry was posted in Book review and tagged Bok review. Bookmark the permalink.