As the season draws to a close and the nights draw in we have been doing a series of bat walks for groups.

The final Priory Bat walk has been and gone and like all the others this season has been very fully bpoked an we had to turn people away.

Nicky did a walk for some beavers at Harrold Odell. We were expecting a group of 12, and two groups plus their parents turned up. Had we known we would have sent more people along and more equipment. Bat detectors had to be shared one between seven which means everyone had a poorer experience and Nicky had a tough time keeping her eye on the youngters.

We are happy to do walks but this was a health and safety nightmare. 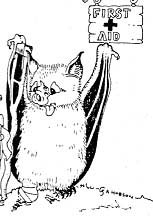 An easier time was had by Bob who led a walk at Ampthill Park on Tuesday for the Maulden Watch Group. Usually Jude tags along, but she is still hobbling about on crutches and so stayed at home.