After the jam packed surveyors’ meeting last week, we met last night for our October committee meeting.We were joined by Lisa Worledge , the Bat Conservation Trust’s Partner Group Officer, who joined us on the way back from holiday. Her poor morris dancing real ale drinking husband had to spend the evening in the Albion, a local pub renowned for its real ale. 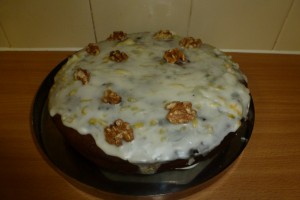 This called for cake, which look a bit gruesome in the photo, but tasted OK.

We do our last night time survey on Thursday, so are winding down for the year- at least in theory. We recapped the events of the season, but also made some plans for next year. The  2015 diary is already looking pretty full and all we have done is fill in the regular surveys.

In addition, Soggy and Simon were hatching cunning plans and Aidan has finished his mark 2 harp trap

We also decided on speakers for the AGM and have plans for a big blitz on a local site next August – more details of which at a later date.

We covered an enormous amount of ground in three hours. This was lightened by frequent references to lures and other committee members in- jokes. 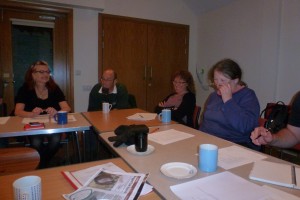 Some of the committee
Photo Jude Hirstwod

This entry was posted in Uncategorized and tagged Bat Conservation Trust, committee. Bookmark the permalink.