There are a surprising number of occasions when bats find their way into literature. This page is just a small sample. If you have additions please e mail us. 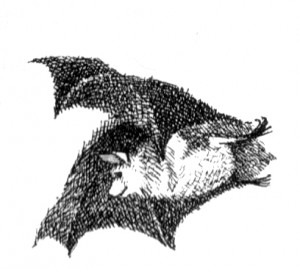 Randall Jarrell The Bat Poet
This is the quote that got us started on bat lit.It is from the book of the same name illustrated by Maurice Sendak which we featured in Vol 73

” A bat is born
Naked and blind and pale
His mother makes a pocket of her tail
and catches him. He clings
to her long fur
by his thumb and bones and teeth
And then when mother dances through the night
Doubling and looping
Soaring, somersaulting
Her baby hangs on underneath
All night in happiness
top
Click here for the rest of the poem

Ogden Nash
The bat’s a radar guided gent
For night time’s flying he is meant
The art is not to snag your hair
(Unless you’re hiding insects there).

CS Lewis The Screwtape Letters
CS Lewis “I like bats better than bureaucrats. I live in the Managerial Age, in a world of “Admin.” The greatest evil is ….conceived and ordered (moved, seconded, carried, and minuted) in clean, carpeted, warmed, and well-lighted offices, by quiet men with white collars and cut fingernails and smoothe-shaven cheeks who do not need to raise their voice.

Gertrude Bell (1868-1926), went to Oxford to read history, and, at the age of twenty and after only two years study, she left with a first-class degree and traveled widely

“Sir Percy Cox is a great naturalist. He is making a collection of all Mesopotamian birds – sometimes they arrive dead and sometimes alive. The last one was alive. It’s a huge eagle, not yet in its grown up plumage but for all that the largest fowl you’ve set eyes on. It lives on a perch on the shady side of the house and it eats bats, mainly. These bats are netted for it in the dusk when they obligingly fly across the river and over Sir Percy’s garden wall. But the eagle likes to eat them in the morning, so the long-suffering Lady Cox keeps them in a tin in the ice chest, and if ever you’ve heard before of an eagle that lives on iced bat you’ll please inform me.”
Extract from Gertrude Bell’s Diary 21st August 1921
_____________________________________________________________ 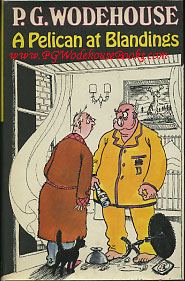 A Pelican at Blandings, by P. G. Wodehouse
“A bat, flitting in the darkness outside, took the wrong turn as it made its nightly rounds and came in through the window which had been left healthfully open. It then proceeded to circle the room in the aimless fat-headed fashion habitual with bats, who are notoriously among the less intellectually gifted of God’s creatures. Show me a bat, says the old proverb, and I will show you something that ought to be in some kind of a home.” 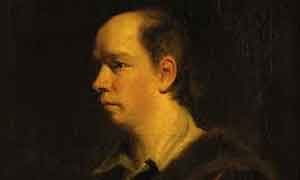 Ted Hughes “9 Willow Street”
What looked like a slug, black, soft, wrinkled,
Was wrestling, somehow, with the fallen
Brown, crumpled lobe of a chestnut leaf
Suddenly, plainly, it was a bat
A bat fallen out of its tree
Mid-afternoon. A sick bat? I stooped
Thinking I’d lift it again to tree-bark safety
It reared up on its elbows and snarled at me
A raving hyena, the size of a sparrow,
Its whole face peeled in a snarl, fangs tiny
I tried to snatch it up by the shoulders
But it spun, like a fighter, behind its snarl
A crowd collected, entertained to watch me
Fight a bat on Boston Common. Finally
I had to give it my finger
Let the bite lock. Then, cradling it,
Gently lifted it and offered it up
To the wall of chestnut bark. It released me
And scuttled upwards backwards, face downwards,
A rearguard snarl, triumphant, contorted
Vanishing upwards into where it had come from
At home I looked at the blood, and remembered:
American bats have rabies. How could Fate
Stage a scenario so symbolic
Without having secreted the tragedy ending
And the ironic death? It confirmed
The myth we had sleepwalked into: death This was the bat-light we were living in: death 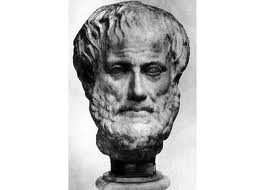 Aristotle
For as the eye of bats are to the blaze of day, so is reason in our soul to the things which are by nature most evident of all

“And Bats flew round in fragrant sky’s
and wheel’d or lit the flimsy shapes
that haunt the dusk; with ermine capes”and woolly breasts, and beaded eyes.” 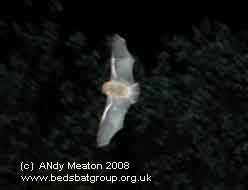 Chiroptera Richard George
The summer evening ages
To silhouettes, and pin-head stars
And vespertine, the first
To serotine, the last,
Bats unfold strange names,
Flitting twilight, out of reach:
Bechstein.
Natterer.
Daubenton.
The men who loved them
Their lives were a prayer
To God the naturalist:
Natterer elbowed his desk,
Bony fingers stretching wings apart
While Daubenton fished as the dusk fell,
In his beard a glint of teeth
As his bat hawked, low over water.
And the rarest? Bechstein?
Could this be him, I wonder,
Wrapped in his leather, upside down
Twittering hello?
Here is my net. I cast it out
To christen him.