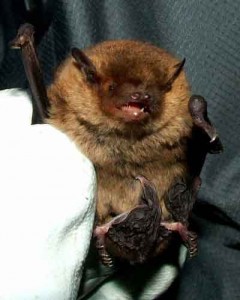 Soprano pipistsellles are small bats between 4 and 8 g in weight, with a body length of 33-48 mm They usually leave the roost about 20 minutes after sunset. In mid summer, they may appear before sunset.

Sopranos pipistrelles are more selective in their habitat choices than common pipistrelles. They are woodland bats who need to have a water body nearby.

Soprano pipistrelle roosts tend to be larger than common pipistrelle roost and can cause difficulties for house owners as they can have a characteristic smell, but there are usually ways of overcoming this.

Like the common pipistrelle, it is only rarely found in Bedfordshire Hibernation sites.

Pipistrelles have a distinctive way of flying and are the bats you are most likely to see, They have a swooping, fluttering flight and often fly in circles following the same route over and over again,but you can’t separate the three species on the basis of flight pattern.