The success of the first stage of the project and the fact that fifteen people had joined the bat group gave us further encouragement. Of the fifteen bat group recruits nine went on to become very actively involved in the Bat Group . Without them this level of activity would not have been possible. We decided on the following low cost options:
We also decided to  be as flexible as possible and respond to requests for activities. Activities in green were opportunities that arose during the year after our initial planning sessions and shows the importance of being flexible.

In January 2008 we were contacted by Diana Hagues, the new Count Bat Officer for our region. We invited her to a meeting in Queen’s Park to brief her on the project. At this point she told us that there would be some funding from the Count Bat Project which now had Heritage Lottery Funding

This funding paid for hall hire for the May walk, transport for the September walk, a pitch for the Bedford River Festival on June 2th and 13th and reprinting more Bat group bookmarks..

Street Ranger Paul Wheatley and Park Ranger Danny Fellman came up with a schme to build bat boxes at Queen’s Park Lower School. Bat group members came along to give advice on siting of boxes. They used the newly designed Kent Bat Box and we soon realised this was an ideal box for youngsters to build All the boxes were put up in the school grounds. 2009-10 bat box building at queen’s park 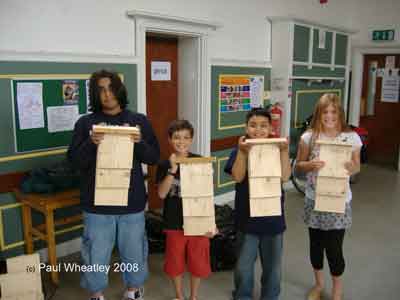 Danny and Paul then went on to build more boxes with the Queen’s Park Rangers. These boxes were put up in Queens Park and at Priory Country Park