In 2007 the Bedfordshire Bat Group ran a highly successful pilot for the Bat Conservation Trust’s Count Bat Project.We worked in Queen’s Park Bedford and have been working there ever since, in close collaboration with Priory Country Park Rangers . For more detail click here

We held meetings with Wardown Cultural Services . It was agreed they would  find target groups, would contribute several hundred pounds towards buying commercial bat boxes and would install the boxes for us.. In the event they were not able to  spend as much as they first said on buying boxes , or find us groups. At the end of the project the bat group had to instal the boxes themselves.  Had we known this at the outset we might have been less willing to get involved. But our very positive experience with the Priory Rangers lulled us into a fall sense of security  ( though we did have contingency plans in case the project faltered)

Building on our considerable success with building Kent  bat boxes in the Bedford area we decided this would be one area we would target.

In 2010 we turned our attention to Luton.  We obtained a National Lottery Grant  for £ and ran a series of events between May 2010 and March  31st 2011 when the project officially ended. We have continued to work in We were awarded the grant in January but were told we could not advertise the fact until after the General Election. This raised an immediate problem as we wanted to advertise the project

So in the meantime

We set up a Luton Bat Project facebook page, where we could post information and also photographs of events 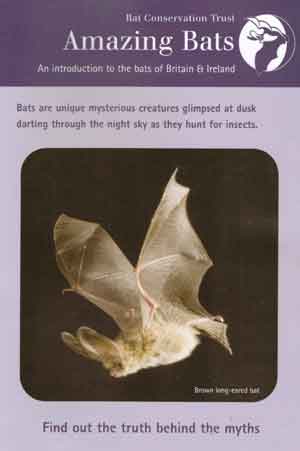 We ordered a huge consignment  of BCT leaflets were ordered  to be given out at events we organised. We gave out over 5000 leaflets at events  during the project.The most popular were amazing bats, encouraging bats and living with bats. You can order leaflets direct from BCT 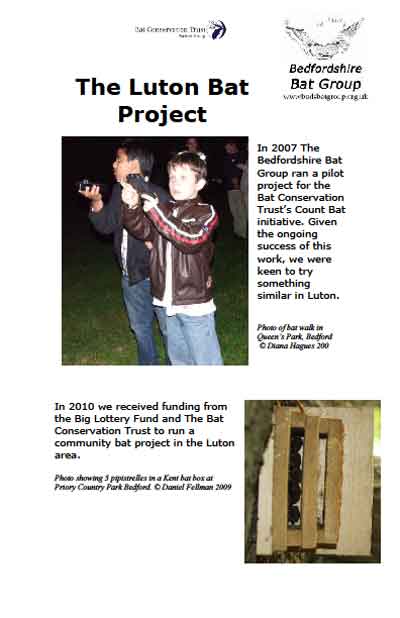 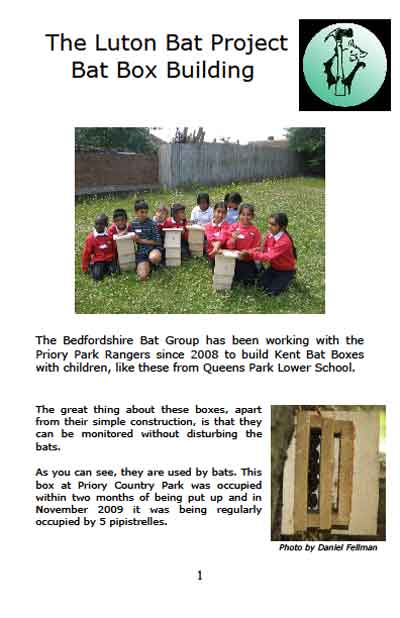 A photo guide on building a Kent Bat Box modelled by Danny Fell man and Mark Best at a Kempston School). This is now being used by the Bat Conservation Trust when they run box building projects and by the RSPB. It is also being used by American bat conservation group. A version of this has now been included in the Bats for all Resource Pack
Download it here as a PDF  Kent Bat Box leaflet

Ordered a new updated version of the bat group bookmark. On the other side we have photos and brief information about the four bats people are most likely to see – ‘ Soparno and common pipistrelles, noctules and Daubentons.. We give these out at events and it is an effective way of publicising the bat group. 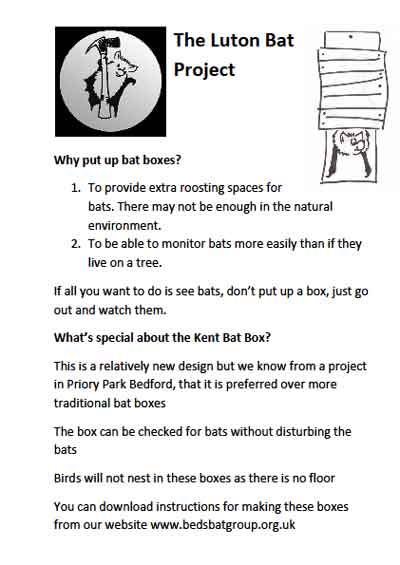 We also located a volunteer who was prepared to help us prepare the box kits for us, without whom the project would not have been possible

Networked busily to find organisations to work with.

Bedfordshire Mind were keen to work with us and The Bat Conservation Trust gave us a £300 grant so we could get started before May We used the grant purchase tools for the Bedford group and we could buy our first tranche of wood. Members of the group prepared the kits themselves and went on to make boxes. What we had not anticipated was that one of the members was a skilled pyrographer and he made a design for the boxes. These were so good we arranged to sell them on our stalls  and the  profits from their sale went back into the local Mind Group 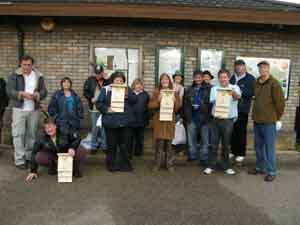 Later in the Year we organised two bat walks for them. One at Priory County Park and one at Harrold Odell Country Park. We really enjoyed working with the group and got some really positive feedback 2010-4 -batsinmind,

Once we allowed to get started we worked hard to make up for lost time and tried to orgnbise as many events as possible before the school term ended in mid July. The summer holidays were when we concentrated on surveys, and events and then once the autumn term began we switched our attention back to box building. So what did we achieve?

We drew heavily on Danny Fellman’s experience of building boxes with groups in Bedford. We worked  with scout, guides, and brownie groups , woodland craft folk and 3 schools. In each case we delivered a twenty minute power point talk about bats and then showed them how to make the boxes. Jude did most of the talks  with help from Soggy and Tanya, and Mark was our bat box making supremo. 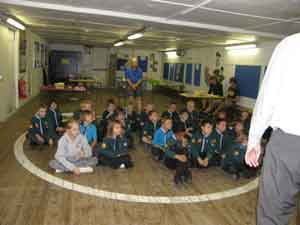 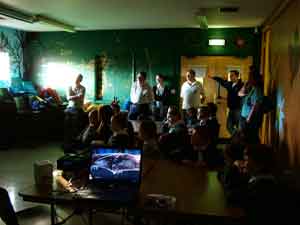 Where youngsters were too young to build boxes we finished off the talk with sessions in which they made bat finger puppets, bat masks or thumbnail bats. 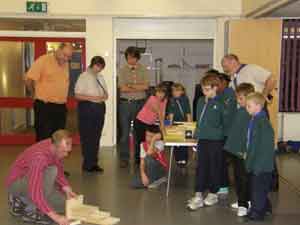 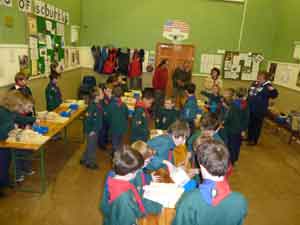 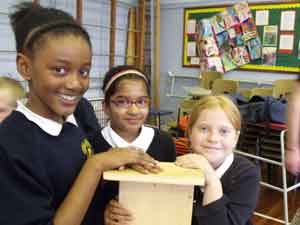 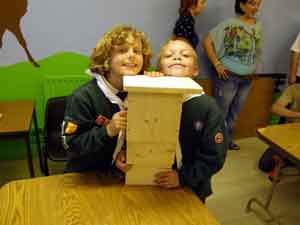 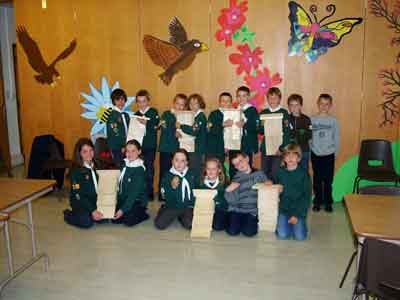 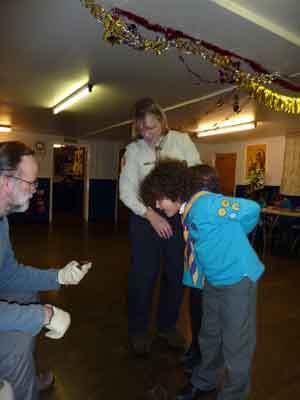 An unexpected benefit was the arrival of the injured Slip End Noctule into our care, and once we realised she could never be released we got a licence for her to be used as an educational bat. She proved a great hit with youngsters and adults alike.

At the end of each session those who had made boxes were given a specially designed badge and a pack of Bat Conservation Trust leaflets, a Beds Bat Group bookmark and a bat sticker.

You can see more photos of these sessions on our Luton Bat Project facebook page.

We held an exhibition at Wardown museum during a period when 29,500 visited

We were delighted when Elise  at  Luton Museum asked us to put up a display in the museum’s coffee shop.  We were able once again to draw on our experience in Queen’s Park, and  used and modified materials we had produced then – as well as producing new materials. Some of these ae now available in the Bat Conservation Trust’s Bats for All Resource pack. 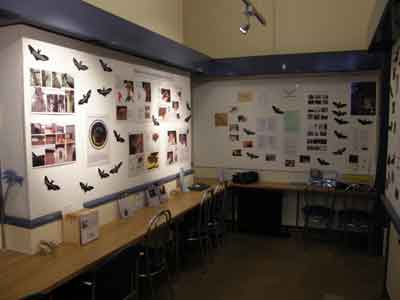 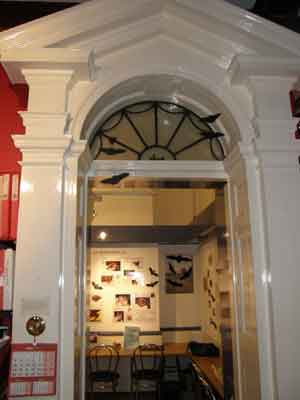 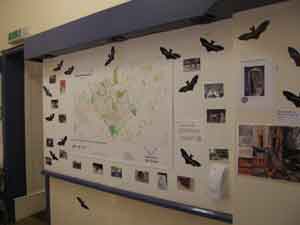 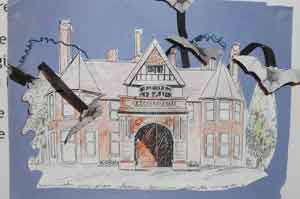 We also helped out at a Bats fun Day and were helped by Kin of Wobbly Giraffe who led activities for children. We have worked with Kin several times since and she went on to produce materials for the Bat Conservation Trust’s Bats for all Resource Pack and joined us presenting a workshop  at a Bat Conservation Trust outreach workshop

We installed a close circuit TV set up in the museum in order to try to capture on film the brown long eared roost that lives in the attics. Brown long eared bats like to have a choice of roosts and Wardown museum is ideal as it has 31 attics. The bats were too wily  managed to avoide the cameras wherever we pout them. We had hoped to capture scenes like this, but alas they were too clever for us. 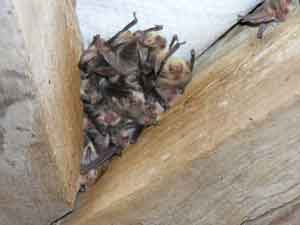 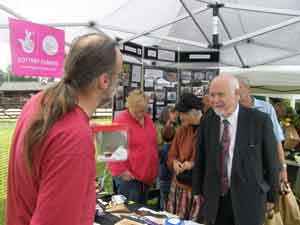 The captive noctule gets to meet Luton MP Kelvin Hopkinson 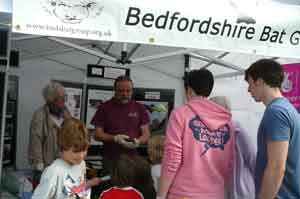 We concentrated our stalls in the Luton area are were kept busy. Once again the captive noctule was a great crowd puller and got to meet a wide range of people 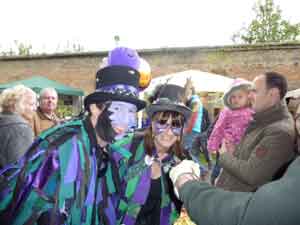 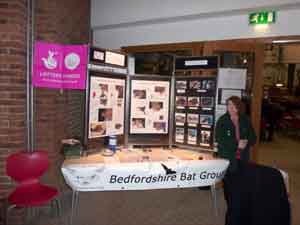 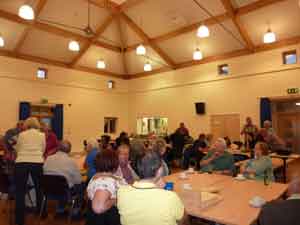 This was somewhat a new departure for us, but we are now being invited to do talks for all sorts of groups as word spreads. We had fun talking to Luton Parkinson Disease association and they made some boxes . The only bat box workshop we have ever done that had a bar. 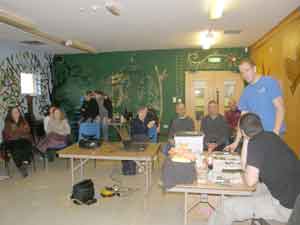 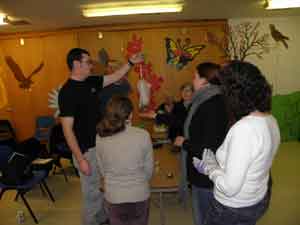 We organised 11 walks in Luton

These were initially for groups that had built boxes for us, but more groups contacted us asking for walks.These included the |Slip End Gardening Club, Luton Sight Concern and the Motor Neurone Disease association. 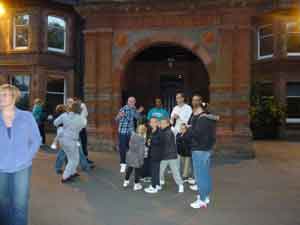 Wardown Museum also asked us to do some walks for them, We insist there are no more than twenty at any walk so every one has a good experience , so you can imagine our reaction when 40 and 60 people turned up for the two walks we ran. The museum has promised that they will keep to their agreement to limit numbers if we organise more walks. walk 1 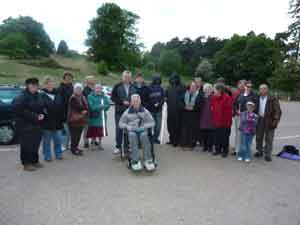 We carried out a walk for Luton Sight Concern, who had a great time listening to the bats in Stockgrove Park. 2011-7- sightconcern walk

Count Bat have produced a video about working with visually impaired people. watch it here

We carried out 16 woodland surveys 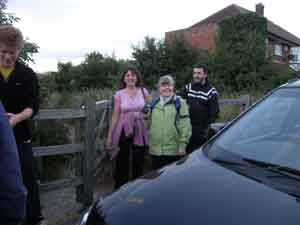 We visited a number of sites in the Luton area, some more than once. We didn’t find anything startling but got a good number of records, including one more hibernation site.. 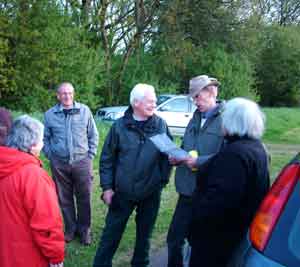 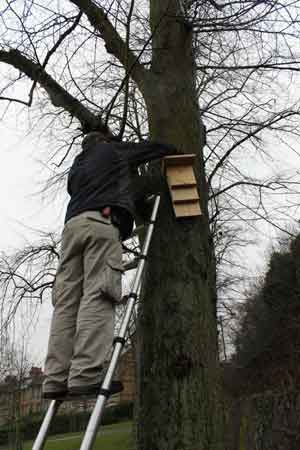 Some of the boxes we made were donated to the scout groups that had helped make them and were put on sites they used for their camps.

We are undertaking an ongoing monitoring of these boxes

Sadly a number of boxes were vandalised shortly after being installed. Those not damaged beyond repair have been moved to other sites