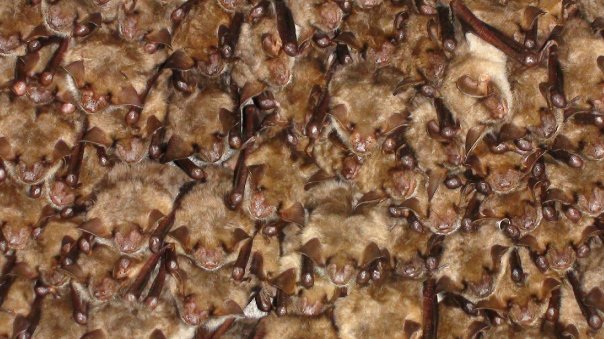 White nose syndrome has had a devestating effect on cave dwelling American bats.  We know that the causative agent in a fungus called Geomyces destructans. http://www.nwhc.usgs.gov/disease_information/white-nose_syndrome/

We knew that this fungus was present in Europe but Europeann bats seemed to be able unaffected.  Now for the first time investigation of a few dead greater mouse eared bats in the Czech Republic have shown  it can infect bats

“The results from the histopathologicalexamination[ looking for infection at the cellular level] confirm the presence of white-nose syndrome in Europe, with two of the bats found dead testing positive and exhibiting symptoms of the disease such as significantly lower weight.”

You can read the original paper from which this picture has been taken  at http://www.caves.org/WNS/Martinkovaetal2012%20WNS%20in%20Europe.pdf

Previous studies in America have shown that the fungus is only transmitted by direct bat to bat contact, and bats like the greater mouse eared bat  do gather in huge clusters

In Bedfordshire we lack caves and the bats we find do not cluster in this way. The Bat Conservation Trust has issued guidelines for checking hibernating bats www.bats.org.uk/data/files/…/Bat_carer_guidance_Nov_2011.pdf

This entry was posted in Uncategorized and tagged white nose syndrome. Bookmark the permalink.