The bat group has been allowed to monitor bats at Woburn Center Parcs and last night we set up two harp traps with lures and a mist net and waited. We were accompanied by a number of Center Parc staff who wanted to see a bat close up.

After a quiet start we began catching and caught thirteen bats in all, two brown long eared, 5 very wriggly soprano pips and five equally wriggly Natterer’s bats. This gave Chris another chance to handle bats and Danny the opportunity to wrestle with some slippery sopranos.

Luke was kept busy recording and soon got back into the flow of things, despite being attacked by A Very Vicious Nettle.

Then the night turned surreal – neither Luke nor Chris are cake lovers. It was decided not to expel them from the group  there and then,  as it left more for everyone else . We then caught a bat that we hoped might be a Nathusius but after careful deliberation and a lot of peering at the penis and measuring the wing:5th finger ratio, it proved to be a large soprano.

Then a bat that,on a superficial glance as it was being extracted from a harp trap, was thought to be a Daubenton’s : then then we looked at it  closely . A lot of pouring over field guides ensued and it was decided that bat was indeed  a WAB. Regular readers will now this is bat talk for ” err we can’t be sure whether it is a Whiskered,Brandt’s or Alcathoe”. The beast was put in a bag so we could get a poo sample for DNA analysis ( the only way to be sure) as no-one was sure about the fine details of the teeth. 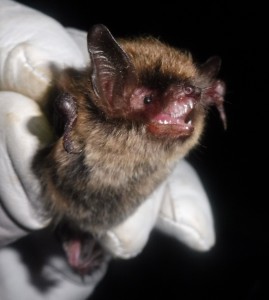 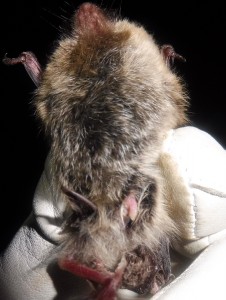 Whatever it is, it will be a new record of a rare bat in a new site, so whatever the outcome we are happy, and are sending the dropping of for analysis