A loan of a gold medal to a Bat Group Member

The Bedfordshire Bat Group relies on its members to do all the things it does. One of our stalwarts Danny Fellman works as a ranger at Priory Park Bedford. Since joining the bat group he has got Natural England Roost Visitor’s Licence and has organised numerous evens at Priory Country Park and further afield. These include bat walks, a bat box project, building bat boxes i local schools and with the help of the Viking Kayak Club popular Bats and Boats events and canoe suveys along the Ouse.

So it is fitting that when Etienne Stott , the Olympic Gold Medal winner, came to Priory over the weekend where a Viking Kayak Club was taking place, Danny got a chance to hold a gold medal. He is at pains to pint out that he returned it once the photo was taken. 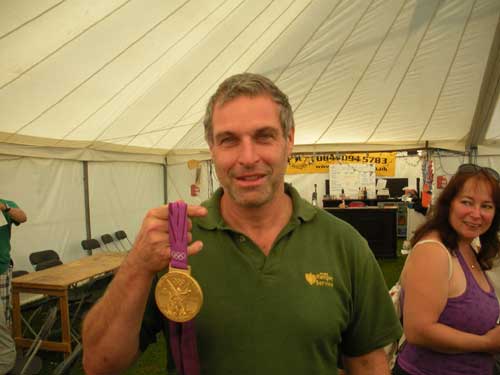