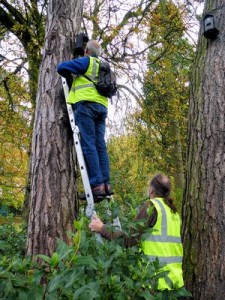 On Friday Geraldine, Dick and Bob did a check on the bat boxes we have in Luton, and drew a complete blank. This was a disappointment and we hoped for greater success at the Main bat box survey.

On Saturday,Phil, Bob and Chantelle trudged throughout the wood, but unlike last year when there were several boxes with several bats in, they drew an almost complete blank. The only bat they found was a male soprano pip who was just past his best in breeding condition terms, and looked very dishevelled – was he, in the words of Monty Python’s Dead Parrot sketch ”  tired out shagged out after a long squawk.” ( Bob is delighted to have found that Phil is another Monty Python Fan)

While Danny will continue to monitor the bat boxes at Priory Country Park, the rest of the gang will be taking a well deserved rest until next year.

This entry was posted in Uncategorized and tagged bat boxes. Bookmark the permalink.