Soggy Sabiniarz has been caring for a rather special bat,  read her account below 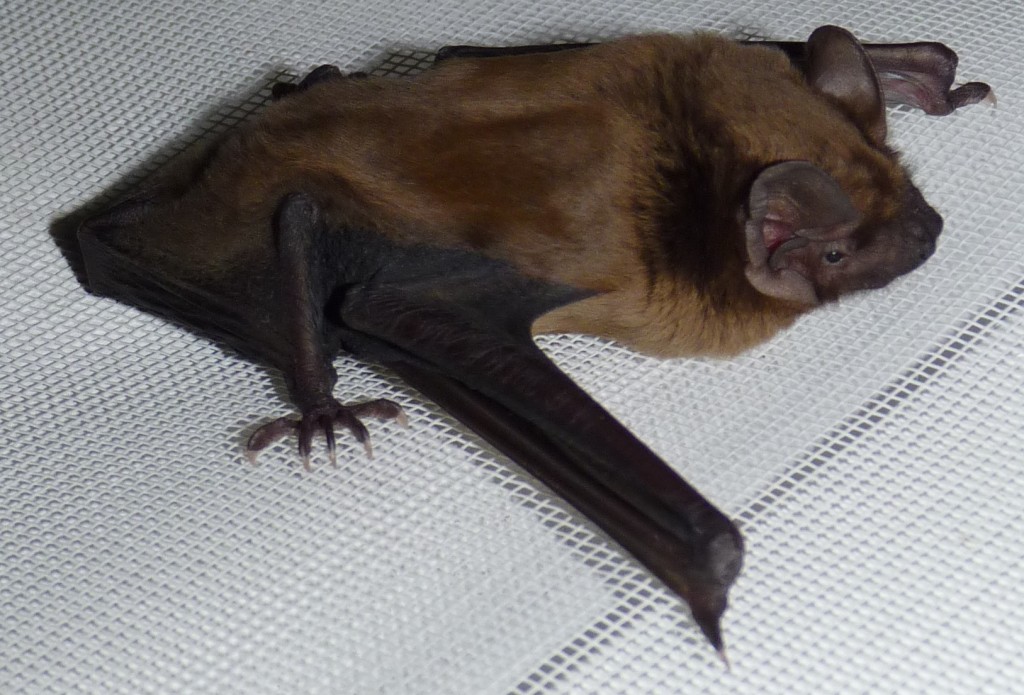 11th July 2014 I took a call from the biology teacher at Sharnbrook Upper School where a bat had been hanging on the wall of a classroom for 2 days. I was work at the time and called Danny to see if he was available to collect it.
Later that day Danny and his family came to drop off the bat. It was a juvenile female and she was a little weak (10g), strong but feisty.
Affectionately named Sharn, she grew from strength to strength (21gs), mostly due to her appetite for mealworms; she was such a noisy eater!
It was time to see if she could fly. Reluctantly at first, she flew daily from my hand to the curtains (a total of 7ft) and because my lounge is so small she was unable to get momentum up for full flight, so a call was put out for a larger flying area.
Jan Ragg from the Essex Bat Group contacted me to say she had a flight cage we could use, in Essex (gulp) so one Saturday night I drove to Harlow to introduce her to her new abode. Again a little reluctant at first, but she managed a couple of lengths before I left. She was to stay there to get her ready for release.
After a week Jan was in touch and said Sharn needed more space, so was taking her to Norfolk to a bat group member who had a larger flight cage. This time she left with a bat box, to get her used to being in one and to make it easier for a soft release.
After another week away, she was ready and armed with an arborist (Paul). Jan arranged to meet me at Felmersham Gravel Pits, Wildlife Trust site very close to Sharnbrook Upper School. (Thanks for Nancy at the Wildlfe Trust for giving us permission to do this) 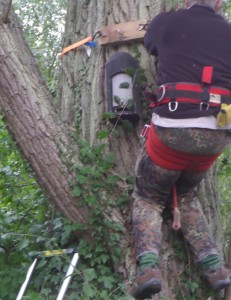 Seconds after I had extended my ladder to see how far it would reach Paul was up the tree and putting up a Heath Robinson contraption he made the night before to hold the bat box in position. Within 20 minutes he had the box installed and Sharn was put back into it with a tray of mealworms, just in case she was not able to find food that night. The last I heard from her was her chomping on her mealworms, one happy Noctule.
It was a cold night and I was concerned that she would have been a bit reluctant to fly and would need more mealworms. Upon checking the box the following evening, all the mealworms had gone and so had the bat.

Thanks to Jan Ragg and Paul, the Essex and Norfolk Bat Groups and most of all Soggy for all her hard work to ensure a happy ending