In October 2006, the Bedfordshire Bat group was offered the chance to host a pilot project in 2007.

2007 Pilot Project
The project ran for six months with the aim of involving communities which were not traditionally involved in bat groups.We hoped that if this project was successful we would be able to attract funding for further work. While we like bats a lot, we don’t expect every-one to agree with us, but if this encourages people to take an interest in any aspect of the natural world then the bat group is going to be delighted.

The project was funded from 90% from landfill tax with a 10% top up from Bedfordshire County Council. 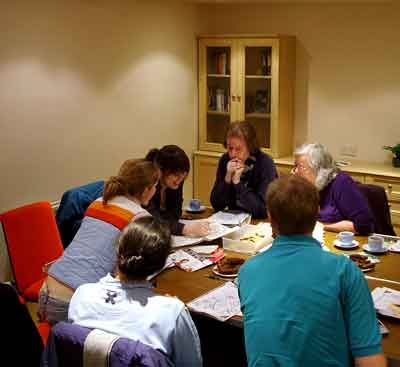 By the end of this meeting between Pride in Bedford, BCT and the bat group (some of whom have a formidable list of contacts) we had decided to work in the Queen’s Park area of Bedford and had brainstormed loads of ideas.We identified the Pride in Bedford Project as a good starting point

Queen’s Park was not an area the bat group knows – which was one reason why we chose it, but at our next meeting we met some of the urban and street rangers who were able to provide invaluable advice as we tried to turn our ideas into reality’ 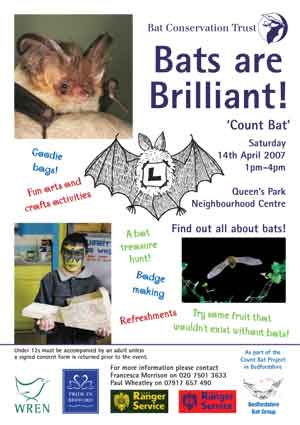 A chance to find out about bats in Bedfordshire and other parts of the world.
Help us collect experiences and stories about bats from round the world – Bat treasure hunt – fun arts and crafts activities – badge making – try some fruit that wouldn’t exist without bats – refreshments and more

On our last major event in Queens Park, we tried out some new things 2007 -9Jun Count Bat including Willow sculpture,face painting and storytelling. This is when we started our collection  of bat folktales

Queen’s Park Family Day Friday July 27th 1pm-3pm
This was an additional event we tended having been invited by the Queen’s Park Street Ranger, Paul Wheatley. Mark manned the stall for this event. Any Queens Parkers who recognised themselves in any of the  photos we had taken  were invited to drop by drop by and say hello and order a copy of the photos. 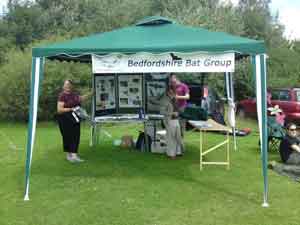 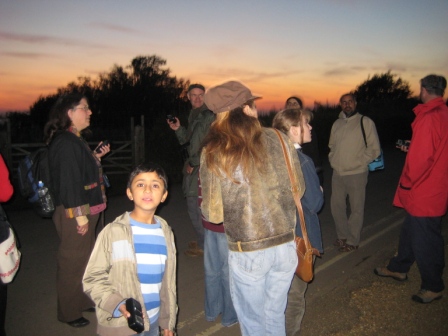 Bat detector training day September 15th 2007 at Priory Park , Bedford.
The Bat Conservation Trust laid on a more advanced one day course on how to use bat detectors. It was attended by 12 people, including some who had joined us during the Count Bat Project and a number of others that we met for the first time. It was held at Priory and two of the Priory rangers attended. After a theory session we headed out to try our new   the lake at Priory. As well as both pipistrelles, Noctule and Daubenton’s we also we picked up Nathusius’ pipistrelle – a real rarity in these parts. We hope to go back to try to track down a roost or two. 2007-11 batdetectortrainingweb

Write up of the Count Bat in our Annual Report .count bat section 2008 annual report