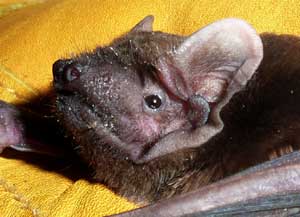 In early May the weather was dreadful and we couldn’t get out much – making up for it now – so were able to do something we had planned for ages., but had never found the time to do. While we had custody of the captive Noctule for a school talk we took a photo of her and have had it made into a postcard. We will be selling this on the stall in the Summer to raise funds.