At this time of year a bat’s thoughts turn to finding a mate and for the last month or so the air has been full of males calling to females.  Sometimes males and females will go a a particular site to look for a mate – just like a human disco but with fewer numbers.and without a disco ball We have been looking for these sites for a while now and tried a new place last night.

Martin finally got a night off from being a consultant and organised a swarming survey in the Luton area. Eight of the gang, already suffering withdrawal symptoms, turned out and swarmed to the site where two harp traps and an autolure were set up,hopeful that a bat or two might turn up.

It proved to be a very successful evening and we were able to confirm a new swarming site. Lots of bats about and 5 Natterer’s, 1 Daubenton’s, a Brown eared bat and a barbastelle were caught. 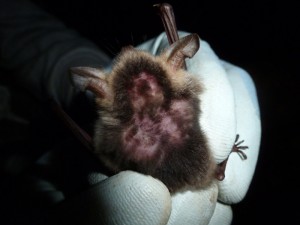 One of the Natterer’swas a sorry looking creature who had lost fur on his back and head. (This is not altogether unheard of and may be due to a dietary deficiency or a severe parasite infestation) Hope it’ll be all right during hibernation.

The barbastelle was  a great capture and is the first time we have caught a one this far south. It could well have been a Herts. barb playing away from home.

Will we be tempted to try our luck again this season? – watch this space. With  sincere apologies to Sam who we we told there would not be a lot happening last night and so it probably wasn’t worth a long drive. We did say probably!

This entry was posted in Uncategorized and tagged autumn swarming, barbastelle, survey. Bookmark the permalink.