A little while ago Bob went to a management meeting of those overseeing the wood where we have our major bat box project.Bob took along his latest summary of the findings from the survey. One of those attending was a representative of Lafarge Aggregates who owns some of the land.  He was impressed by the work so far and offered to buy us some bat boxes to go on their land. 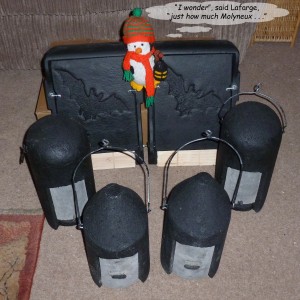 We ordered another 6 boxes to bring the total up to 59 boxes and today, very shortly after we ordered them, they arrived. Before we stowed them behind the sofa until the New Year, there was just enough time to take a quick photo

This entry was posted in Uncategorized and tagged bat boxes. Bookmark the permalink.